Right from the time, the recent racial(is it so?) remarks against Shilpha Shetty in 'Big Brother'(the U.K. reality show) hit the news(Read the Story here), every Indian has lifted a protest flag complaining that we are always at the fag end of the racial attacks. But before pointing our fingers at others, let us first examine ourself.

According to Oxford dictionary, the racism is defined as "Belief in superiority of particular race; antagonism towards other races"

Going by that definition,

Is not the still prevalent caste system(the National SIN of India) in India a kind of racism?
Are not the recent attacks by the ULFA on Hindi-speaking people racist?
Can not be the regular Shiv Sena attacks on non-Mumbaites be called as racist attacks?
Are not we treat the outsiders(who are also INDIANS) as second-rate citizens?
And who can forget this photograph?... 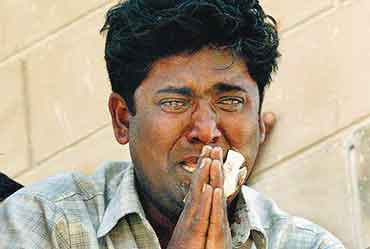 Even thinking about this has made my heart to lose all the happiness & joy. Oh! India, even after living for more than 50 years as a single nation, you are not able to integrate?


Please.. Please.. Before pointing fingers at others, let us think about us?


Not that i am trying to justify the racist remarks against Shilpha Shetty but let us remember we as a society also have our own faults. And acceptance(repentance) is the first step to correction(redemption).
- An Indian who is a part of this racist nation
Posted by Unknown at 5:27 PM

I completely agree with your post and have some points to add. There may be quite more to this issue than just racism - be it the increased publicity to an actress whose career is on the downside (she has subsequently denied the racism allegations), the higher viewer ratings to the show (though the sponsors have backed out of it, and the public have largely opposed it), the news that the host is donating all the money she got to charity (as chosen by her and Shilpa), the Indian government and the way it reacted to this (imagine a county's external affairs and finance minister reacting to an incident which is very small as compared to the multitude problems the common citizens are facing everyday, which largely goes unaddressed), the sheer irony that the host herself comes from a mixed background - white mother and black father (i'm not having any racist intentions by referring to the colour) or the fact that we're commenting on an issue having a MAK assignment tomorrow!

Sreeram,
Yes da.. Agree with u that there are a lot of issues in this than just racism.. But i was concentrating on just a single issue...