What can I Give to My Nation?

The title is taken from the Address to the nation by the President of India Dr. A.P.J. ABDUL KALAM on the eve of the 58TH REPUBLIC DAY - 2007 . If you have not read it until now, please read it here. 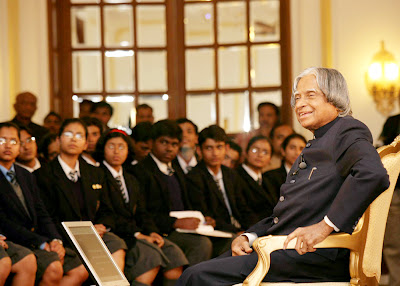 A must read for every Indian who loves his nation...

After reading it, i am unable to wait for the India of 2020 with 100% literacy rate and nearly zilch People below Poverty line.

The address also stresses the role that needs to be played by each and every Indian especially the youth for such a future. I was especially attracted by the call to the youth to enter the politics. Politics has always been a career option that i have been looking at for a very long time. [If i am entering politics, surely would be running for elections in TIRUNELVELI only:-))

But, with the current set up of Indian politics, it is virtually impossible for any honest youth to have at least a semblance of chance to win the elections. To win, you need a backup of a well known-party to win the elections. Also you need your fair amount of supporters to campaign. Add to this, the money that needs to be spent for publicity and various other purposes related to elections. Hope this changes so that youth like me who are out there wanting to do something for the nation are given a chance to take part in the Indian political scenario.

But the President's call is surely a tonic to my dreams. Especially his final call to the youth of the nation to have