Disclaimer: I am not an astrologer nor i have any supernatural or paranormal powers to prophesy about the future. Disciplines like water divining, astrology, numerology, and fortune telling, along with many other forms of divination are unknown to me.

The only reason for this post is that i can brag about in the future about my correct predictions. So here, goes my prediction for each of the world cup teams - what will happen to them & what won't. Believe them at your own risk.


Scotland, The Netherlands, Bangladesh, Bermuda, Kenya, Canada, Zimbabwe Ireland - Except for Zimbabwe, I don't see any of the teams playing more than the allotted two Group Matches. Even for Zimbabwe, it is a very small probability(0.05%) that they will qualify by upsetting Pakistan.
Prediction - Group Stage

Pakistan - The only team with a little probability to lose out in the group stage itself. On the utmost, it will reach Super Eight stage. My prediction - They will upset atleast one of the superior teams in the super eight matches. Person to look out for - Bob Woolmer
Prediction - Super Eight

Srilanka - Another team I am sure that it will not cross the Super Eight Stage. Person to look out for - Sanath Jayasuria & Tom Moody
Prediction - Super Eight

WestIndies - With a lot of pitches relaid, I don't see any big advantage for the home team. I am sure they won't cross the Super Eight Stage. But Lara may cause a surprise in one or two matches.
Prediction - Super Eight

New Zealand - Ah! Now the predictions are becoming difficult. It is really a tough thing to predict who will go among the New Zealand/England/Australia trio for the semi-finals. My prediction - New Zealand will not cross the Super-Eight. The only thing that is hindering me to say this confidently is Shane Bond. Surely watch out for him. [If Bond does not face any injuries in the world cup, the master will take his team to semifinals]. Anyway, My Dark Horse for the ICC World Cup 2007 - New Zealand.
Prediction - 50.5% - Super Eight, 29.5% - Semifinalist, 20% - Finalist

Australia - I am sure they wont reach the finals this time around. My prediction is not based on the last 5 continuous losses recently.[though it got strengthened by it & its image of invincibility is gone]. Just the fact that Pointing wants Symonds in the world cup team even if he can play only in the latter stages is enough for me to know their true strength. [Please remember how France badly wanted Zidane in FIFA world cup 2002]. Player to watch out for - Ponting
Prediction - 40% - Super Eight, 60% - Semifinalist

England - I am sure England will reach the semi-finals, not a level less and not a level more. Watch for the big man with a smile.
Prediction - Semifinalist

South Africa - After missing the finals for 3 world cups(they deserved it), I am sure that this time around the No:1 team is a 100% sure finalist. Player to watch out for - Ntini
Prediction - Finalist

India - My prediction is that it would reach the finals. But it may also be the one that may lose out in the semi-finals. It depends largely on that day's conditions & pitch. One of my basic gut feeling is that world cup '07 is about individual brilliance & talent. That gives India an edge because of the potential it possess.
Player to watch out for - Sourabh Ganguly
Prediction - Finalist - 90% & Semi-finalist - 10%

1. Something, I was thinking to post for a very long time. But somehow not been able to do so. Mr. Adolf D'Souza winning in the BMC(Brihanmumbai Municipal Corporation) elections as a Citizen's candidate [without any political party backing him] has surely given a big boost to my hopes of entering political arena one day.

2. Until Feb 16, 2007, a blog named Tirunelveli--->Chennai--->Indore--->??? was sitting idly on its own, known only to a very few private eyes but still hoping, still believing a lot more people will come, see and enjoy its beauty :-).. But on Feb 16, 2007 its wildest dreams come true. Yeah! Google web crawler has finally found about this blog. So if anybody has the inclination to look for it or any of the treasures it possesses, it can be found out.

(Sorry if the picture does not look clear. Try this.)

A Ray of Hope 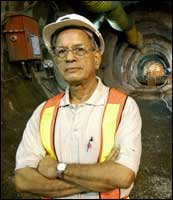 Studying in the premier institute like IIMs has its own benefits. One of them is the regular visits/guest lectures by eminent personalities. Yesterday, one of the legends of Modern day India, Dr. E. Sreedharan, the Metroman of India visited our campus and shared his experiences with regard to the Delhi Metro Rail Corporation Ltd. (DMRC).

What this 70+ Indian has achieved to be called as a legend?
Born in a country, known for delayed Government infrastructure projects & lacklustre government workforce, achieved something that was considered to be impossible. Finished the Phase-I of the Delhi Metro Rail project ahead of schedule. [Remember every 1 day saved = 1.6 crore rupees with regard to the project]. Read about it here in New York Post. 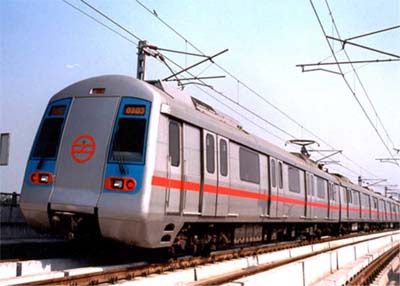 One of my aunts who works as a Principal in a Government college always used to say that the Indian Government has the best of the employees with regard to what they could achieve. [Her logic was that during her days, the best of Indian minds enter the government workforce.] But most of the times this potential remains untapped.

Dr. Sreedharan has shows what can be achieved with the same old Government workforce which for most of the times remains as a butt of our jokes.

Certain Key Points from his lecture:

Seeing people like him, surely gives me a ray of hope that the Indian Government workforce of tomorrow would be able to function much more efficiently.

After the recent Cauvery tribunal verdict, there has been tension reported in Karnataka, especially in Bangalore. (Read the news here). Hope any untoward incidents like the one that happened in 1991 do not happen this time around. If any violent incident occurs, Bangalore is sure to lose the status of "Silicion Valley of India".(atleast in the minds of the Tamils)

It was reported in Indian Express that there were sporadic incidents of violence in the Tamil dominated areas in Bangalore. We have been living as a single nation for more than 50 years. But Still how far apart, people in each State have been. [What is the logic behind targeting a community for the verdict by a national body in which they have no role to play?. This escapes my mind.]. These incidents shows how much racism is still prevalent in india.

If communities/States/Nations fight for water now itself, fear to think of the up-coming days of global warming, when it will be more tough to find water on this beautiful earth.

GOD, Please Save this Earth!

My long wait for the last of the Harry Potter series is going to be over in another 166 days. :-) If you want to know how important Harry Potter is to my life, read @ "Harry Potter & Me".

For the muggles, who have not heard the news, the final book of the Harry Potter series " Harry Potter and the Deathly Hallows" will be published on the midnight of July 21, 2007.