Please don't read this if you don't want to know about the person behind the name 'Robin'.


The reason I choose my Blog title as "Tirunelveli--->Chennai--->Indore--->???" is mainly because it neatly sums up 'who I am' in a whole lot of ways. A person from a place unknown to most in the country(Tirunelveli) first experiencing a city that too a metro city with a more than a million people(to be exact - 4.2 million people in the city), then moving from the conservative TamilNadu to one of the places filled with highly intellectual people. These transitions and stays, coupled with my hopes about the unpredictable future have imparted an unique flavour to me. [My competitive advantage] 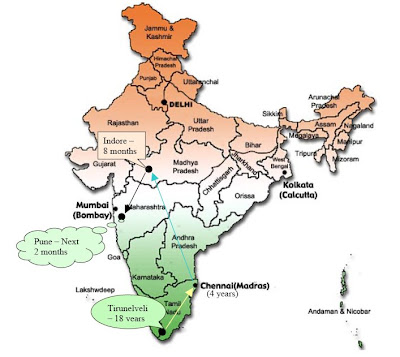 My home town - Tirunelveli, which is making a slow transition from a semi-urban to a city life style gave me a privilege of identifying myself with the rural masses of this land. Chennai exposed me to traffic, pollution, exorbitant auto rates, multiplexes and the beauty of beaches. Though i lived in the heart of the city, the hostel life surrounded by rural & semi-urban students prevented me to know about the true city/liberal lifestyle. Being cash-starved, also played a major role in it.[Luckily/Unluckily, Being surrounded by Computer wizards of CEG did not have any major impact/learning on/for me]. Indore in a year has made a whole lot of changes to my personality that even my undergraduate course was not able to accomplish in its four years. Though in Chennai, certain activities outside college transformed me as never before. Now for a short period of time(around 2 months), I am moving to Pune for my academic summer internship. Hope Pune too would have an impact of its own in my life.

P.S - Phew! A very long post to convey a simple message that 'I am moving to Pune during this summer'[Impact of studying in IIM???]. Hope to write the next article on 'My beautiful Memories with 2007 Batch of Planet-i".
Posted by Unknown at 12:23 PM