VolleyBall in 'Clash of Titans' 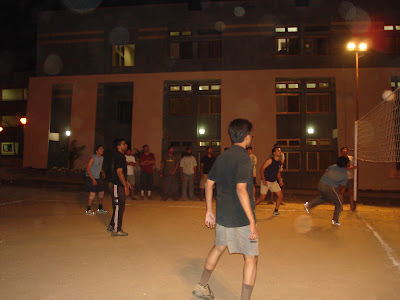 Sports Movies (however bad they were) have always been my favorites. The fact that even the underdogs/unknown can beat the favorites in any given day has attracted me like a magent to sports movies . Added to this my zilch participation in any sports event made sure that the emotions that a sports player undergoes enthralls me - anytime, anywhere.

So when the 'Clash of Titans - Inter Section Sports Meet' was declared, I was personally expecting 2 weeks of unadulterated fun. But never did I think that I would be participating in a game. But call it fate or luck, I ended up in the Volleyball team of Section - 'A'. It was one hell of experience that I am surely going to carry for the rest of my life.

’Clash of Titans - 2007’ had a great start with the First Volleyball game between Section A Vs Section B turning to be an absolute thriller. In Set 1, we (Section A) were comprehensively beaten by Section B with Abhishek, Kristoff, Amaresh combining beautifully for them. But by second set, we were able to exploit some weak spots in their game and won the second set. If anybody has expected the third set to be a nail biting one, it turned out to be much more. To make the story short, we found our Midas touch in the last minutes winning the set and the game. Aided by some injuries, Rest of the volleyball matches turned out to be a walk over for us. The only interesting part was that our Section proving that even Mcgrath has to learn sledging from us.

Now the good part - I walked with a cool 500 rupees for just standing idly and letting the other five players play their game. :-)

P.S - I know this is not an Olympic win to rave about so much but still this is an experience that I would never forget.