Story of an Alarm Clock 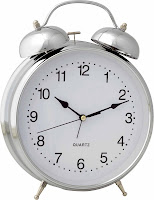 Most of this post is an excerpt from one of my comments in Sajeev's Post - 'Terror Strikes E-Block'. Don't have any doubts. The sleeper who was not disturbed from his slumber even when the powerful cracker(atom bomb) burst on his neighbour's room is Me. So I decided to narrate my life at College of Engineering, Guindy where my neighbours had a hell of a time with my alarmclock. [Posting it here since somebody commented it is good.] :)
"Once long ago, there was an alarm clock in the hostel room of a student studying in a dream city called chennai in one of the best colleges of the world. And this alarm clock had the rare ability to wake up the whole block when it likes to. But alas! it does this every morning... So when its music begins, everybody in the hostel will wake-up and run to the door outside the block to hear its most beautiful sound.. But for sometime, they will stand outside shouting, encouraging this alarm to sing louder. After a few minutes resenting the fact that the door outside was reducing the effects of this great musician, they would start to kick & bang the doors... After a few minutes of their turmoil, the owner of the clock will slowly get up.. Immediately the happiness of the alarm clock would go a notch higher, thinking it is going to see its fans who daily come to hear its beautiful music.. Alas! dup! the owner will switch it off... Now, it has to wait until the next day for its audience.... Hmmm... Still relishing those beautiful days.."
Posted by Unknown at 1:39 AM