Yoga and Christianity: Are they compatible 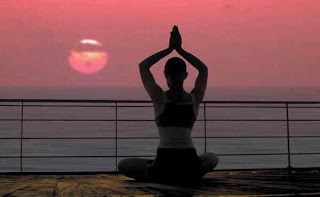 When NDTV news reported about "Two Church halls in U.K. banning Yoga", it might have been a shock for a few Indians. But for the Indian Christian community, it is something that has been under discussion for quite some time. (Though the Indian Catholic Church immediately expressed its displeasure of the decision of 2 church halls).

But my first dash with Yoga was enough to take my own stand of keeping myself away from Yoga, in spite of its multiple benefits. "Surya namaskar", the first exercise that was taught to me, made me feel uncomfortable, just by its name. (Remember, it is a blasphemous thing for both Christians and Muslims to worship anything/anyone other than God). And i feel more uncomfortable at places where Yoga is made compulsory.

P.S: Major reason for writing this post is not to explore the compatibility of Yoga with Christianity, but just to remind that there may be a few among us who don't carry the same high opinion about Yoga as a lot of other Indians do.

I am an agnostic. But seriously you read to much into Surya namaskar. It's not worshiping the Sub. It's greeting the Sun on the day!!! It's like you say namaste to other people. Yeah if someone does feel that it is against religious sentiments should express it, but in a way other people may not feel that they are being insulted.

Your blog is nice. I think you should add your blog at www.blogadda.com and let more people discover your blog. It's a great place for Indian bloggers to be in and I am sure it would do wonders for your blog.

@ Ayush,
I accept that I read too much into Surya namaskar.. But think me as someone who has been bombarded with " Incompatibility of yoga with Christanity".. It was just a tipping point..

@ deepanjali,
Thanks for visiting my blog..