Banker to the Poor 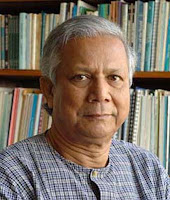 When the Nobel Peace Prize was awarded in 2006, some one would have surely asked what has the awardees - Mumhammad Yunus & Grameen Bank , done for World Peace. But Nobel Peace Prize committee rightly reasoned out that this Banker to the Poor has showed that alleviating poverty creates a world without conflicts - the real Peace. He showed to the world that MicroFinance or just giving access of credit to the poor could do a lot of wonders in reducing poverty. I never tried to understand "Micro finance" then because Finance was and still is out of my boundaries:). But when my intelligent peers at IIM Indore would throw questions about micro finance to all the finance company executives who visited the campus, i thought it as a business enterprise rather a social enterprise. But "Social Entrepreneurship" course, i am taking in Northeastern University not only changed my views but also made me to appreciate the efforts of this Nobel Peace Prize Winner. He has now entered the elite list of Nobel Peace Prize winners that I admire.
So when I came to know that Muhammad Yunus is in town and he is going to speak at Boston University, just rushed off today after the class to hear the man speak. One of the key things that showed up in his speech is his sincerity and his commitment to the cause that he believes in. While in India, we need Governments and Presidents to proclaim to us that by this year(as of now 2020 and i m sure in 2020 they would be saying 2030), Here is a single person proclaiming to the world that there would not be any poverty in Grameen families by 2030. Just got reminded of what I wrote in my earlier post in "In Service for Sight" about Dr.V

"Dr. V by his single-minded focus and vision has shown us what is possible for a single person to achieve individually in the land where we live in. Is it not possible the same way for us also, to do something that the world would take note of?

- Johann Wolfgang Goethe
P.S:
1. This Social Entrepreneurship course I am taking has started to shake my well laid out plans of entering the corporate world after my PGDM degree at IIM. Now I have an idea for social entrepreneurship project/enterprise.At present needing guts(a lot of them, actually) and conviction of my sincerity to the cause to start it.


2. Me having classes during Hillary Clinton's Visit to Northeastern University(Or Campaigning at NEU) means I missed the meeting... How much times do you have the next President of United States(!) right down your street?.. Hmm.. :(
Posted by Unknown at 6:55 AM

Micro finance is a great thing to have happened to the poor,but one has to realize the fact that for those people who struggle to find even one meal a day,this micro finance is not the solution.This is a solution for the poor, not the poorest.

Yes Saravanan.. Most of the people who gets benefitted from the microfinance are not the poorest of the poor. But still it has scope for even aiding those poorest of the poor. I like to quote an example that Yunus gave in his speech.. He talked how if somebody should use a mango to develop into a tree so that it gives them long lasting sustainability rather than using it or consuming it immediately. Similarly access to credit provides even the poorest of the poor with an opportunity to get out of their poverty. It lies on them how they use this opportunity..

Was going through your posts and saw this post again. Thought this link would be very relevant.
http://www.boingboing.net/2007/10/27/streetkidrun-bank-in.html

PPS: I desperately hope there is some way to add and view comments in RSS Reader. Would save a lot of time. Right now too lazy to search for the solution. The effect of having continuous holidays :)

@ Sreeram,
Thanks for the link... So now following Boing Boing in your google reader..
Hey.. For viewing the comments, there is a comments only rss feed for all blogs da.. [i view comments of this blog in google reader da.. ].. e.g comments feed for my blog is http://robinsamuel.blogspot.com/feeds/comments/default

Just change the name to get the comments feed of your blog...