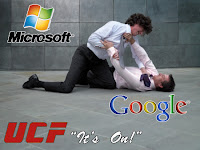 David M Ewalt famously predicts in 'The Future', a new feature in Forbes Magaizine, that by 2017, Google will be regarded the same way as Microsoft is regarded today - bloated, monopolistic and oppressive. He also predicts that Google will be providing free internet and phone service across USA. (Read the article at David Ewalt on the Internet 2017)
On reading this, was reminded of the headlines in 2005-2006, when everybody were excited that there is somebody who is rising up as a competitor to Microsoft(Only hard core APPLE evangelists will believe that Macintosh was a competitor to Mircorsoft!). But when the quesion was put forth to Bill Gates, he famously retorted - IBM as Microsoft's Top rival.(Yeah! Microsoft has started rivalling IBM in bureaucracy in a technology company!), But the plates have reversed in a single year. Now nobody even asks that question because Google has clearly won the battle.

But interestingly, Google has done this not by some great technology(yeah. their search engine provided them a great starting point) but by intelligent management decisions - Going any length to attract best talent from competitors, Aggressive Acquistions, A Motivating vision - "To organize the world's information and make it universally accessible and useful". And Bill Gates is finding himself in the same position as IBM of 1980s & 1990s.

Wanna Read More about the dying legacy of Microsoft???
Read from Scoble - Why doesn't Microsoft get the love

Update: It seems Google does not have to wait for 10 years to be called oppressive & bloated... Read Scoble's post deriding Google as only caring about big people - "Google Android - We want developers but"
Posted by Unknown at 4:46 AM