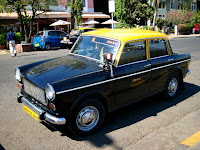 Like your first love, the first time you were conned by some one is always an unforgettable incident. This post is how i was conned at Mumbai. (I thought about writing it on reading Mumbai airport fraud in Vimal's blog.)
"Since I came out of the domestic airport to spend a few minutes with a few friends of mine, I was not allowed by the police officer to board the linking bus from domestic airport to the international airport. (Though at that time, it looked like the police officer was just showing his authority... after the con, i believe he is also a part of the scam gang). Since, it was peak time, the queue for the prepaid cabs was so long, I was forced to bargain with other cabs. One of the cab wallahs came for the lowest price among the lot - Rs. 200/- (which was still unfair). But having lived in Chennai for 4 years, overpaying is always a part of the deal if u want to go to a place fast. So I accepted it. Surprisingly, the car stopped in a dark place after a few minutes of driving and the guy handed me 3 one hundred rupee notes and asked for a single 5 hundred rupee note. When i handed a five hundred rupee note and he returned back the money that was got just 2 days earlier from the bank as torn. I got a little bit tensed. Anyway, knowing that i could get the rupee note changed in the bank, I gave him another five hundred rupee note.

Now he returned a 100 rupee note back saying that I gave him only a 100 rupee note. I sensed a serious scam. And weighed other options - there were 2 hefty guys on the car(Driver + Agent), I don't speak Hindi, my chances of getting a cab from this new place is minimal and most importantly I was already late for my flight(My Negotiation Classes has taught me that I could be easily intimidated). So I was forced to shell out another two hundred rupees. Immediately the driver and the broker got down and another person drove me to the airport. After that the cab wallah dropped me at a place where another airport staff tried to con me another 20$. Thankfully! I was alert by then.

So Beware! If you take a cab from Mumbai airport, always go for the prepaid one however long the queue is.

I am from Canada and was only conned once when I was new to India's way of life.I don't think I can be fooled like you did again cause I speak the language fluently and know my way around Mumbai.But every person goes through this atleast once

@ ajayrat,
Yeah.. May be I wont have been fooled if i m fluent in the language or otherwise i would have atleast fought back.. But with me being late already, i did not care that much.. Anyway.. it was a nice experience to have.. since i wont be much more careful the next time..