Finally an Indian B-School finds itself among the Top 20 B-schools of the world. [That too in a ranking released by the reputed financial newspaper "The Financial Times"]. Surprising News - it was ISB and not IIM - Ahmedabad that finds itself in the elite list. Indian School of Business surely deserves accolades for putting Indian education sector on the global map. In doing so, ISB has provided right wing politicians an example to point out how seemingly impossible task by the government becomes possible with a few committed individuals.

One thing that caught my attention, when i read the news in The Hindu, is the length to which the Deputy Dean of ISB, Mr. Ajit Rangnekar went to point out that there could be no comparisons between Indian School of Business and IIMs since they were in different market segment. But still all the management institutes (IIMs & ISB) approach the same group of corporates for recruitment... And this ranking will surely sky rocket its brand among the key decision makers in the corporate world.

P.S: On reading the rankings in FT, I was just a little bit curious. on.. How the weighted salary of ISB is the highest in the world, even higher than Harvard Business School? If anyone knows the answer, please inform me.

Indian children are not safe

It has been a long time since i was reduced to tears on reading something. But this unthinkable happened on reading the report from Ministry of Women and Child Development on Child Abuse in India - 2007.
A few statistics from the report that shook me
On reading the report, my first reaction was to to discredit the report rather than accept the precarious situation, the children of our country live in. For those(like me) who could not accept the fact that the report could be reflective of the true situation, here are a few facts: 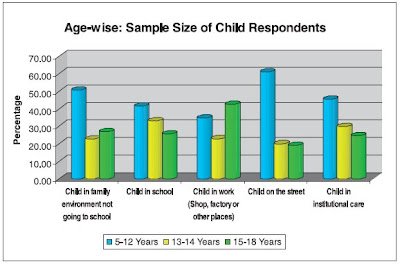 Age-wise: Sample Size of Child Respondents
The report clearly points out the monumental task, each of has in ensuring the safety and well being of the future leaders of India(Just remember Indian children constitute more than one third of our population and 19% of world's children)
P.S: This is just an introductory post. Planning to write a series of posts about the different kind of child abuse in India - Physical Abuse, Sexual Abuse, Emotional Abuse and Girl Child Neglect

Things You Must Know - Kiva 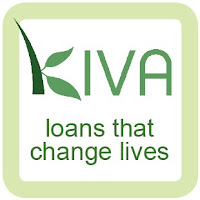 Similiar to Facebook that revolutionized social media, Kiva has revolutionized the micro finance industry. Recognized by many experts as one of the major things that would change the future of the world, it is time Kiva finds a mention in Indian media. While Nobel Peace Prize Winner Muhammad Yunus showed to the world that small loans could change the life of poor people, Kiva brings the advantages of technology and globalization to the micro finance industry.
What does Kiva do?
Through its website, Kiva lets you and me to connect with and loan money to unique small businesses in the developing world. By choosing a business on Kiva.org, you can "sponsor a business" and help the world's working poor make great strides towards economic independence. Throughout the course of the loan (usually 6-12 months), the sponsor receives email journal updates from the business they have sponsored. When the loans are repaid, the sponsor gets his loan money back (but without any interest). For gaining access to outstanding entrepreneurs from impoverished communities world-wide, Kiva partners with existing microfinance institutions.

What Kiva has done?
Kiva has used the power of the internet to facilitate one-to-one connections that were previously prohibitively expensive. In its website, you will find hundreds of entrepreneurs in need of loans stating the purpose of the loans and how the loan money would be put to use. You can lend to any one you choose... from any part of the world...

Thanks to Bill Clinton and Oprah Winfrey, Kiva is swamped by lenders willing to lend to people they did not know and living in a far away country (Thanks to the demand created by the Oprah's television show, Kiva has limited lenders to a $25-portion of each loan so that many more people would get the opportunity to loan).

Visit kiva.org and check out for yourself. As some wise man said, "It is not the amount that helps, but the helping hand"

Also Read
Posted by Unknown at 1:32 AM No comments:

A few news items that helped me to smile even amidst the gloominess caused by the stock market crash:
P.S: Got to read these news items, thanks to India Uncut
Posted by Unknown at 12:27 AM No comments:

Ahmedabad Office of NDTV, India's largest private producer of news and current affairs, has been vandalized by a Hindu fundamentalist group. Not because the NDTV reported wrong about the group... Not Because they hurt the religious sentiments... Not even because NDTV sided with the minority groups... It was just because they included "Picasso of India" as one of the contestants in their opinion poll for Bharat Ratna, . Read the news here.
While some of the experts may use this incident to point an trend of increasing attacks of Hindu fundamentalist parties and their high intolerance, I am left numb with the question: How can a group get the courage to attack the regional office of India's largest television Production House? Is not the same courage that emboldened the Congress members to attack the Sikhs after the death of Indra Gandhi? Is it not the same courage that emboldened BJP & Shiv Sena to attack the Muslims during Gujarat & Mumbai Riots respectively? Is not the same courage that emboldens thousands of politicians to accept bribes? A Courage fueled by an immunity from punishment. A Courage that stems from the fact that the law would not be able to touch them. A Courage that symbolizes the complete breakdown of law and order in the state. A Courage that scares every person on the rough end(Media in this incident).

God Save Gujarat!
Posted by Unknown at 3:39 AM No comments:

Do you pluck your eye if a dust particle falls in it? No. But if you believe in PETA Activists, that is the way to go w.r.t Jallikattu, an ancient Tamil tradition. Like their environmentalist comrades who wanted to ban TATA Nano to address the problem of lack of mass transit system in metro cities, the PETA activists wanted to ban Jallikattu to stop cruelty of animals. If they really wanted to stop cruel practices like spraying chili powder in the eyes of bulls or giving it local brew, they should ensure legal mechanisms to prevent these cruel practices rather than asking for an outright ban of Jallikattu. [But Kumaraguru even disagrees with the claim of cruelty to animals in Jallikattu in his Economic Times article - Ban on Jallikattu]

In their passion for preventing cruelty to animals, PETA activists cross the fine line of intrusion into another man's beliefs and customs. They are right in believing that animals should not be tortured in the name of a sport. But what they don't understand is that Bull Chasing is an ancient tamil tradition/sport that has survived for 3500 years. And it is very much part of Tamil culture. To the extent, that any Tamil movie set in the rural villages of Tamilnadu is incomplete without a 'Jallikattu' scene. Also Jallikattu could bring in much needed Tourism revenues to the arid & dry southern parts of Tamilnadu. So Please don't ban Jallikattu citing sporadic cases of animal cruelty.

It has been an year since i came to know of RSS and met Google Reader. It was love at first sight. Since that day, Google reader has never let me down, coming up with regular improvements and added features. Though my experience with Google reader was more than satisfactory, it was FeedDemon that was in my dreams. But I consoled myself that one should learn to live happy with what u have. And assuring myself that I would never lay hands on FeedDemon.

But a surprise awaited me, last Tuesday. Newsgator decided to make FeedDemon software free, making it accessible to people like me. And now FeedDemon occupies the coveted position of 'My favorite RSS reader'. If u r using Google reader, give FeedDemon a try.

Also Read
Posted by Unknown at 6:36 PM No comments: 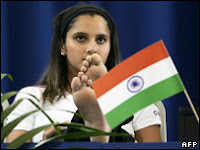 Why should Sania Mirza has to face controversies after controversies? Why should Tamil Actress Shriya face a police complaint for wearing an outfit that is 'very very modest' compared to her costumes in movies?
These issues shows the rising trend of 'controversies just for the sake of controversies' in India. :(

Ratan Tata and his team at TATA motors had made India proud with the "World's Cheapest Car" - a disruptive innovation that has the potential to change the face of Global automotive industry. But Indian environmentalists like Sunita Narain are calling the government to tax the car "like crazy" and make sure that the car becomes economically nonviable. [Read the news here]. My first reaction to these news snippets is to question the Indianess of these environmentalists. Can't they see that TATA motors is giving wings to dreams of hundreds of Indians who want to own a car in their lifetime?. Can't see that Cars symbolizes an additional form of mobility and freedom to a lot of Indians. Yeah! Environmentalists have a point in raising the issue of lack of proper mass transit system in most cities in India. But Can't they see that the various benefits of TATA Nano like placing TATA & India in the global automotive map, its export potential, etc. outweighs the costs?
In an rediff article, Mritiunjoy Mohanty, Assistant Professor of IIM Calcutta has come in support of TATA Motors and explains(correctly) why criticizing Rs. 1 lakh car is wrong?

Other Reads
Disclaimer: I have never been a great supporter of Environmental concerns. Rather than supporting environmental issues blindly, I prefer a "Cost-Benefit Analysis" approach to issues raised by environmentalists.
Posted by Unknown at 1:16 AM 2 comments:

Role of Caste in Indian Cricket

Ah! Finally an Australian reporter writes how caste could play in who represents India in cricket. On reading the news - 'A Class Act? Opinions Differ', I was shell-shocked. Who would have thought this situation exist in Indian Cricket Team, the one love of all Indians?
Only Fools believe that caste plays a role in the selection of Indian cricket team. But as the article points out that there is a huge number of people from a single caste(7 in the playing 11), disproportionate to their percentage of Indian population. It means something is wrong somewhere. May be there is a caste discrimination at the lower level... May be the elitist sports is played only by the elite caste of India. But whatever may be the reason, it has to be identified soon and corrected. Or else it could become a tailor made situation for politicians to exploit for their personal benefits. BCCI! Please Wake Up!
Posted by Unknown at 1:45 PM 2 comments: