Until now, Only the good things about Google used to reach our ears - 20% personal project time, unlimited sick days, Free Food, etc. Lot of people even expected Google the Savior to save them from the Evil Corporation - Microsoft. Sadly, those golden days for Google are slowly coming to an end.

A few Days Back, Google laid off people for the first time. Today ex-Google badmouthing Google email is blogged at Techcrunch – Why Google Employees Quit. It is really sad to see the beginning of the end of Google love story.

We all knew Obama used Web in an effective way to garner votes and gather support. Now Advani wants to replicate his success model in India. So he started his own website and his own blog to connect with people. But sadly India is no America and Advani is no Obama. So his website is not getting any big traction.

So what does he do? Do what he has been taught to do. Advertise so that people will visit his website. Since all the PR and viral videos have not worked. :D 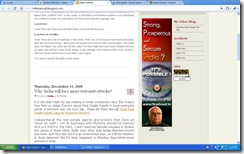 All the Indians who expect an "Incredible India” advertisement from Slumdog Millionaire are sure to be disappointed on seeing the movie. Most of these disappointed Indians have already starting starting pouring different forums with their acid comments.

Ugly Side of India

Yeah. The Movie showcased an extreme or an ugly side of India and it did not provide a complete picture of India. 100% True. But the movie was never meant to provide the complete picture. It meant to show there is an India which still lives unaffected by its glitz and glamour. And I think it did that successfully. [Though I also agree that “Shit” Scene could have been avoided']

Film critics will always point out that around two-third of movie is in English.. What else do you expect from a British Film? It was made so that British and American audience can understand and not that an Indian can understand. So Please don’t play the language card.

Yeah! There are many more talented Indian actors than the lead pair.

P.S: Just my random thoughts on the movie