Not everything is rosy in the world of digital advertising. P&G announced last week it has cut more than 100$ Million (equivalent to INR 635 crores). It cited 3 primary reasons for this
·         Ads were simply ineffective
·         Ads were being served to bots
·         Placement of the advertisements
My uninformed guess would be that the primary advertisement cuts would have happened in
This broad trend of advertising shifting to Google & Facebook was reflected in Mary Meeker’s 2017 Internet Trends – where she clearly illustrated that growth in online advertising in US is largely being driven by Google & Facebook. 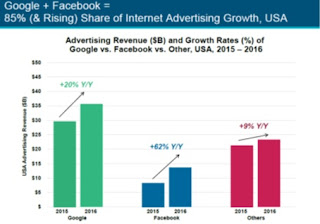 And multiple machine learning algorithms that is optimizing the campaigns in Google & Facebook networks serves as a very effective moat against any new player entering the space. And Google & Facebook are expected to further deepen their moat – by artificial intelligence and machine learning.  My bet is that in a 3-4 year time frame, >80% of the online advertising spends would be done through Google & Facebook platforms only.
But as marketers, should we be worried about Google & Facebook Advertising Dominance? We all remember how Facebook killed the organic traffic for brands inside its closed network. The day Google also faces similar challenges with revenue creation – we can expect it to do the same. If the history shares any trends, a category that was dominated by one or two players – will result in poor services and higher costs for the customers. Interesting Times for a Digital Marketer.
Posted by Unknown at 11:48 AM

The unmarried boys and separated men are so much frustrated for searching for the Mumbai Escorts girls for their need. Whenever they are asking for getting some beautiful girls for their entertainment, they search out the best agency for escorts in Mumbai. However, most times, they do not get reliable agency who can supply reliable girls for their compact enjoyment.

For More information visit us ☟